Godzilla is the queen of monsters, but also one of the biggest icons of pop culture in general. It first appeared in a Japanese film directed by Ishiro Honda in 1954 and has been the subject of thirty-six films, numerous video games, comic books, novels and TV series. We read the original Godzilla as poetry, and it has served us as a reference point for all fears, destructions and impending ends… impending.

The Godzilla Tribute Band is a collective assembled to save the world. Because we want to. Because we have to. We hold a mirror up to the world. Actually, it’s not a mirror that we hold up. It’s much more than that. We are much more than that. We are the creators of the universe. Masters of the ritual that is being created before your eyes. The storytellers of the story we have to share with the rest of the world. Guardians of the weak, the forgotten and the misunderstood. We are the mattock of social change. That is why the world has no choice but to listen to us. And finally grow up.

You will find us on the sly. In a shelter. In the underground.

Godzilla Tribute Band is an original project and is a collective work of the group. It is a performance that wants to be a concert. It is a theatre of objects, cardboard boxes, cornflakes and, above all, people. It looks for inspiration in punk, old films and exaggerated pathos. 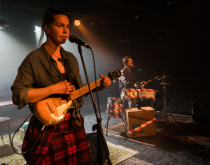 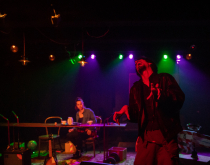 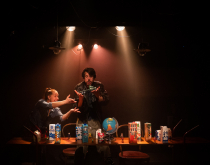